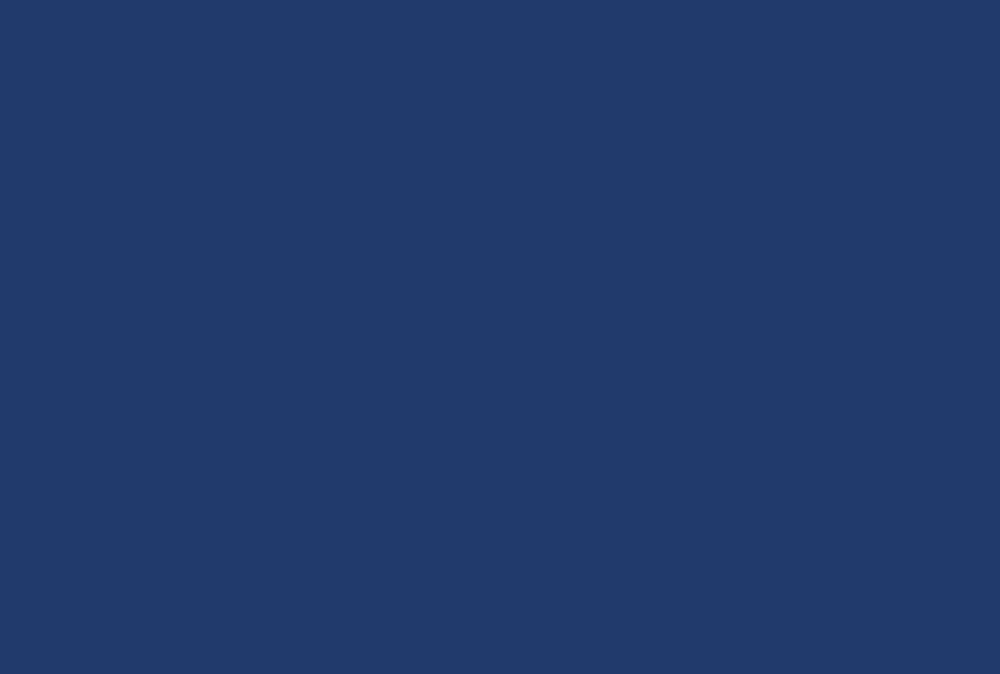 Pregnancy diagnosis in the bitch is a common request in small animal practice. As with all exam types, there are going to be advantages and disadvantages of using ultrasound vs. radiography for diagnosis.
⠀
Radiography is useful for: ⠀
☢️ Diagnosing canine pregnancy in late gestation (after skeletal calcification occurs). ⠀
☢️ Accurately estimating foetal numbers.⠀
⠀
Ultrasound is useful for:⠀
⏲️ Earlier pregnancy detection (from as early at 20d gestation) and likely to get earlier as ultrasound technology improves. ⠀
♥️ Assessing foetal viability (detect beating hearts and calculate foetal HRs).⠀
🚼 Foetal aging. ⠀
⠀
Why is ultrasound not as accurate for counting foetal numbers? ⠀
Because ultrasound is dynamic, and it may not be possible to scan the entire uterus definitively. So some foetuses may be missed OR some could be counted more than once.

Compare the difference in foetal detection and development in radiology vs ultrasound at various stages of pregnancy in the following cases:

A 2yr old female poodle cross 30 days post AI. This is a great example of how ultrasound is much better for pregnancy diagnosis earlier than radiography. 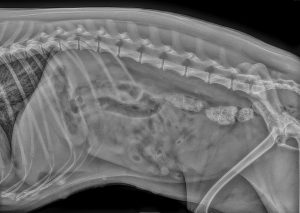 A 2yr old Maltese terrier 46 days post mating. Although pregnancy can be detected and there is mineralisation of skeletons visible, the density is poor at this stage which could still lead to errors in assessment of foetal numbers. 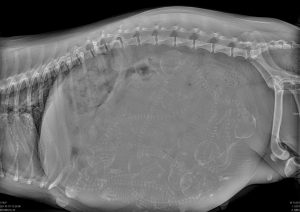 A 2yr old French bulldog 56 days post AI. This is a great example of getting the best of both worlds. The radiograph shows excellent skeletal mineralisation for counting foetal numbers (although even now you could still be forgiven for not counting correctly… Hint: count the skulls NOT the spines!). Ultrasound in this case demonstrates excellent differentiation of foetal structures and detection of a viable foetal heartbeat. 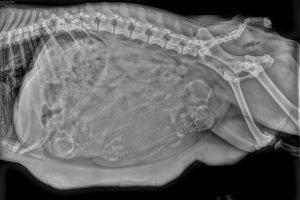 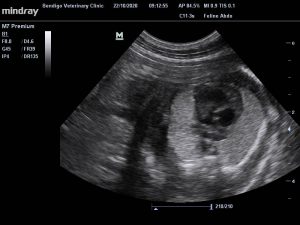 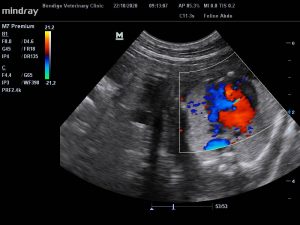 Video 3: Ultrasound cine clip from 2yr old French bulldog @56d post AI. This clip shows a near term foetus with well differentiated structures. See if you can identify the beating heart with hyperechoic lungs either side that are isoechoic or slightly hyperechoic to the liver, the distal acoustic “clean” shadows deep to the ribs, the anechoic fluid-filled stomach and hyperechoic intestines, the hind limbs and the skull.

NB: All ultrasound images and cine clips were obtained by a general practice veterinarian using a Mindray M7 Premium at Bendigo Veterinary Clinic.

Textbooks and ultrasound courses cover more comprehensive details and provide charts and formulas for estimating gestational age. Accuracy at detecting pregnancy earlier and estimating age and/or parturition date improves with experience and correlation of ultrasound findings with results of hormone assays and history.  However, with modern ultrasound systems and the following tips (extrapolated from the references below), even beginner sonographers can diagnose canine pregnancy before radiographic signs are obvious.

Gestational sacs visible from @ day 20 as circular to ovoid hypoechoic to anechoic sacs within the uterus containing asymmetrically positioned hyperechoic embryonic tissue/foetus.  To distinguish uterus and gestational sacs from intestines, remember uterine wall has only 3 layers while intestines have 5 layers visible on ultrasound and when the probe is rotated 90° intestinal segments become tubular whereas gestational sacs remain round.

Embryonic heart beats detectable from @ day 23-25 seen initially as a flicker of soft tissue within the embryo inside the gestational sac (see Video 1 above).

Foetal skeleton visible from @ day 33-39 that appears as hyperechoic interface with more obvious clean shadowing due to mineral density increasing as gestation progresses (see Video 3 above).

Lungs hyperechoic to liver from @ day 38-42 (remember in utero the lungs are not aerated so they have a soft tissue echogenicity).

Head diameter (HD) is the most accurate foetal structure for estimating gestational age (after day 40) although body diameter (BD) can also be used. Prior to day 40, gestational sac diameter (GSD) or crown-rump length (CRL) can be used.  Refer to texts for formulas and how to apply them.

Radiology is more accurate for counting foetal numbers in late-stage (after @ day 55).

US is better for pregnancy detection in the earlier stages (from @ day 20).

US is mode of choice for assessing foetal viability (ie blood flow, heart rates) at all stages once pregnancy is detected (@ day 24 onwards).

Now you know how to diagnose canine pregnancy on ultrasound, stay tuned for our next post on assessing foetal viability…